zelen posts her art every saturday :}

did you know i do not use the bbcode editor thats built in into the post maker i just type and then copy paste the bbcode manually
here. have a front view

creachure idea that popped into my head
Click to expand...

its something like a quadrupedal (like a pterosaur) microraptorine, but with other bird traits like a beak and a shorter tail. not sure how efficient it would be at taking off and flying compraed to a regular bird now that i think about it
Click to expand...

compiled all the customization so far from the starbound mod. well for the plumage and face options at least. i actually forgot one of the face options oops

heres a steller since it has been exaclty a year sicne i got into angry brids again and i started then with playing angry birds stella again
Click to expand...

not a lot this week but
silly redraw

i dont think piggy island really has hedgehogs on it

admittedly this looked better in my head

and finally a dragin

i have a lot HERE however
first of all here is a goodra redesign or something. bc the original design is kind of weird in some ways

futher notes on the design
- its dragon/poison now but friendly. building off of how sliggoo just dissolves things to eat them
- also its stated that sliggoo is losing its eyes so instead of goodra randomly regaining anime eyes i made it lose the eyes entirely. now there is a cute little fringe look. the green spots have relocated back to the cheeks though
- also the shell fully develops instead of only just sliggoo having it and then goodra randomly losing it
- the wings are kinda out of nowhere admittedly. if you wanted a smoother transition there. imagine sliggoo as exactly the same but with little wing nubs
- this one can probably fly but not like. have the levitate ability necessarily
- oh yeah the wings are from the blue dragon sea slug
- hopefully this looks enough like a pseudo legendary?
Click to expand...

i love beetles. sometimes you look soemwhere and just find this
Click to expand...

so ive been wanting to draw fancy pants man for a while here he is. surprised i could replicate the vibe of the og art p well. The poses arent very good though

this just manifested in my head 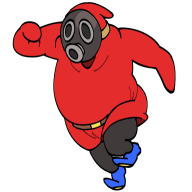 I know this might be an odd detail to ask about, but where do you get the font from for the text in the Angry Birds cartoons? Are you typing it, or are the letters also drawn individually?

i just got the fonts from the apks for the games you can just unpack them with winrar and then itll be in assets/fonts
zelen !!