The Mario series has a vast collection of old and "missing" characters that haven't been seen in years. So I ask, who would you really like to make a return appearance?

I'd have to say Tatanga. It'd be great to see him again.
img]http://img.photobucket.com/albums/v372/doceggman/userbars.png[/img]
S

Maybe ... Wart or someone. Or how about seeing Master/Crazy Hand in a Mario game? They appeared in a Kirby game once.
S

Retired Wiki Staff
The Koopalings, definetly, appearing alongside Bowser and Bowser Jr. in a game would be awesome.

And Mouser and Boshi maybe, those guys were pretty cool.
U

Captain Syrup. Above all else, she has been denied the most potential.
'm Sorry, but you're princess is in another castle...... you want directions? ummmmm.....

ultimatetoad said:
Captain Syrup. Above all else, she has been denied the most potential.
Click to expand...

How could I forget to mention her? Yeah, I agree, Captain Syrup needs a comeback.
img]http://img.photobucket.com/albums/v372/doceggman/userbars.png[/img] 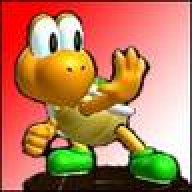 Geno is pretty cool, he should have a game.(Or at least have a cameo appearance). Who is capatain Syrup?
quot;I am your father's brother's cousin's nephew's former roommate!"
S

Doesn't the Geno doll appear in Mario & Luigi: Superstar Saga, that was a nice Easter Egg.
B

Yeah,quite litteraly.The only problem with these was that their battle were too easy.Inviso and Cloudjin, especially, started out as a awesome idea ruined by a lack of dificulty. They had a awesome and imaginative look (Far better that the YI boss who are just a bunch of enlarged generic enemies.) and the boss battle tune pwned.
3

Yeah.. I need to play that game so bad. I have the Player's Guide, but not the game.. :x

3dejong said:
Yeah.. I need to play that game so bad. I have the Player's Guide, but not the game.. :x
Click to expand...

Sweet game it is. But the main theme is ear-scratching.

Geno? Maybe, so that the Europers get a chance.

I think waluigi should have his own game.
quot;I am your father's brother's cousin's nephew's former roommate!"

Retired Wiki Staff
I'll pass on that one. I hate all the spin-off characters. Except Dry Bones. He's cool.

Waitaminute, Smiddle, you mean to tell me that SMRPG wasn't released in Europe?

Retired Wiki Staff
It was never released in any of the PAL regions.

Retired Wiki Staff
Wow. I'm sorry to hear that. It's a great game.

Not that I ever played it.

"the following statement is predictable" I think that Toad needs to get a few more appearences. There is actually a chance that the big N is scrapping the whole "Toad and Toad's" thing, and that they will make it that every time Toad was playanle, it was a different character. PLEASE Nintendo do NOT do this. jus ONE appearence that confirms that he is a character would be good.
'm Sorry, but you're princess is in another castle...... you want directions? ummmmm.....

Retired Wiki Staff
I think the Toad in the spin-offs is "the" Toad.
C

Toad should definitely not be centralized as only one character. That would be pretty dumb, primarily because if it was one character, that would mean that he shares the name of his species, which would be dumb. Notice that Yoshi aren't centralized, because there are so many of them with simultaneous appearances.

High-Five* to all those who said Geno. He's the only cool minor character ever.

Retired Wiki Staff
Regardless of that, Toad still shows-up sporadically, like Dance Dance Revolution: Mario Mix and I think at the start of both Mario & Luigi's.

Retired Wiki Staff
Toad has an often-overlooked playable appearance at the very beginning of M&L:SS.