Why are you a Mario fan?

I've been a fan of the Mario universe since I was about 5 years old.

The characters are so appealing. I'm astounded at how well the main cast fits and works together. I can honestly say that there's not a Mario character I dislike, which is rare for any series with me.

The gameplay, of course, is another great aspect. I always have fun playing the Mario games.

Why does Petey Piranha got to have haters?

I like it because of the amazing look of the characters and everything else! I also like all characters like you! But I really like Petey Piranha!
As you can see from my picture and name! By the way Chris, do you have Mario Power Tennis?

Retired Wiki Staff
I mostly am due to the fact that, when I was a kid, all I had were Mario games for some reason; I didn't even know who Link, Samus or Fox McCloud were until Super Smash Bros. I did have a few Donkey Kong games too though.
U

Same as SG: I grew up with Yoshi's Island and DKC2, and just kinda went from there. I TRULY got into it with that Character list from spacepope.

Like Chris, I also love the numerous characters, the translation to all different platforms, and the gameplay.
'm Sorry, but you're princess is in another castle...... you want directions? ummmmm.....

I first saw Mario on a advertisement for Mario Kart 64 on a Froot By the Foot package. Later that same day, I met a kid who asked me if I played Mario games... I didn't know what he was talking about.
I'd like to meet that kid and shake his hand... 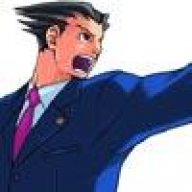 I've played Nintendo games since I was about one-year or two-years old. At three or four, I could play Super Mario World better than any of my sister's friends (she's over ten years older than me). I've been a Nintendo fan fairly consistantly my whole life. During the N64 era, I became a Playstation fan, but still owned a Nintendo 64, and enjoyed Mario 64 and Paper Mario greatly. The Gamecube became my favorite console of the last generation, in part due to the sheer amount of nostalgic ports, and I found Super Mario Sunshine to be a fun experience, and Paper Mario 2 to be one of the most amazing Mario games ever created. Now with Wii here, Super Mario Galaxy looks amazing.

In short, I've been a Mario fan my whole life, but it also consistantly releases good games, so why wouldn't I like it?
ortune shines with seven in hand

like in my presentation, I like the mario saga since I was ! year old, but my mama plays for me, but a time came that mama don't play mario too often as before, then I begin playing by myself and quickly I was a better player than her, and that's how I was born as a videogamer, I still remember the first game that I played, the original super mario bros 3 of nes, and I had mario and the other characters as imaginary friends!!!!!!!!!!!!!!!!!!!!!!!!!!!!!!!!!!!!!! :shock: :shock:

I had mario imaginary freinds, too. Yoshi, Luigi, and Dr. Mario. (my first 2 games were SMW not the wiki and Dr. Mario, both on {S}NES) that last part was for trivia.
ruet told everyone my age so i'm blocked from the Forums.
S

1.It's fun and awsme
2.Yoshi
in democracy we elect people to dictate us
Life sucks doesn't it

Retired Wiki Staff
I have honestly NEVER asked myself this question, and I don't really think I can answer it... I, too, grew up with Mario (Gramma's NES :D ), but I don't really know why I like the series so much... Shameful, eh?

Retired Wiki Staff
Mario Party numero uno. Best game ever! That and Super Mario Bros. Deluxe. Their colorfulness and creativity and great gameplay astounded me. Now, they make for great escapes from an otherwise stupid existence. Ugh... speaking of, I have an English project to do... DANG IT! 1.5 more years... 1.5 more years... huff, puff...
Rawr! Raven/Crow Day!

Retired Wiki Staff
Until college, which is even HARDER. :P

Aaaanyway, to answer this thread's title: Because I can be.

Alternate answer: Because they (the games) are there.

Monty Mole said:
Until college, which is even HARDER. :P

Aaaanyway, to answer this thread's title: Because I can be.

Alternate answer: Because they (the games) are there.
Click to expand...

Retired Wiki Staff
College is not that hard. It's easier than high school, as you have more time to manage your work.
Plumbers of the Mushroom World, unite!

If you were any younger, I would feel very, very old.

Maybe because the first 3D videogame I ever played/watched/thoght was the greatest thing in teh whole wide world was Super Mario 64?
Rest in peace, Walkazo.

Totally a Mario fan!!!!!!!!!!!!!!!!!!!!!!! Love its game,character and music.Sometimes my classmates think that I am weird, because I am the only one like Mario.
Please love them. They changed my life.

ChrisAlassal said:
Simply, why do you like this series?

I've been a fan of the Mario universe since I was about 5 years old.

The characters are so appealing. I'm astounded at how well the main cast fits and works together. I can honestly say that there's not a Mario character I dislike, which is rare for any series with me.

The gameplay, of course, is another great aspect. I always have fun playing the Mario games.

THIS. Word through word.

Why did you bump this? It five years old

not sure if necro-bump

Banned User
Seriously, nearly everyone in this topic is a Mario fan cause of Yoshi???

As a kid, I had a friend who was a Mario fan. I used to play Mario games with him alot, when I played Super Mario 64, I started to get more interested on the series. So, I bought some of Mario's games myself and enjoyed them.

The sad part is that I've never seen that friend anymore