What do you want to see Paperfied? 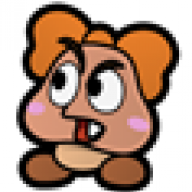 Hi I'm new here and I'm not sure if this topic has been done before so please forgive me if it was.

As a huge fan of the Paper Mario series I was very excited seeing enemies such as the whoomps and the wigglers given the paper treatment and I wanted to know, what other characters or enemies to you want to see getting Paperfied and how do you think they will look. From what I've seen it seems that this game will be focusing on the Galexy and NSMB series but Intelegent Systems, (from what I can tell), likes including elements and references from other games. In the first Paper Mario they included enemies from Super mario world and Yoshi's Island and in PMTYD they showed Beanish characters from the handheld Mario RPG series so any character being included is possible.

What I'd personally like to see are the Snooza Koopas from Super Mario Sunshine. These guys I always felt had such a unique appearance for a koopa and besides there needs to be more beach enemies.

Another character I'd like to see are the Whittles. If the Whittles were to appear I keep wondering if they would be flat 2D like nearly all other characters or have a box look similar to how the pigs were shown in PMTYD considering they are made of wood and may be shown to look like it. Personally I'd want to see them 2D, I think that's much cuter.

So what do you guys want to see? Petey Pirana? Big Bo-Bomb? more spin-off characters like the Beanish? I'd like to know?

Also I'm not talking about partners so don't get the wrong idea here.
N

Whittles would be awesome.

Whittle said:
Whittles would be awesome.

Ya I bet that If paper mario goes on any more space adventures, (he's done so twice already), Rosalina would be a must for including her in the story
M

Figment said:
I'd wanna see Wario and Waluigi turn paper, as well as Donkey Kong and Daisy.
Click to expand...

Yes, and Birdo, just for the lols
G

I know Luigi has already been paper-fied, but I just want to see more artworks of Paper Luigi. I can only find two (Luigi and Mr. L from Super Paper Mario).
Also in my avatar I have a paper-fied version of myself :D
eeeeee​
G

I'd also like to see King K. Rool and any characters from other Nintendo franchises (Pikachu, Kirby, Ness, Olimar, Samus, etc.)

I'd love to see Daisy be officially paper-fied. I saw a fanmade Paper Daisy that looks official. Search "Paper Daisy" on Google Images. It's the one signed "JoeKido 2006" at the bottom. The guy did a phenomenal job!

I'd also like to see paper versions of Tatanga, Rosalina, Birdo, DK, and Wario,

FOR THE LAST TIME, I AM NOT A PALETTE SWAP OF PEACH, OKAY?!
M

Well, these are pretty well-done Paper edits found on the Internet already: Chat Operator
@Baby Luigi: Hey, that's not bad.
@Figment: The Wario one... He looks a bit strange, kind of deformed.

I think Bowser Jr. would definitely be cool to see Paper-fied. And the Koopalings.

I think Bowser Jr. would definitely be cool to see Paper-fied. And the Koopalings.
Click to expand...

Love to see a tap-tap and nobody mentioned poochy.
Rest in Peace Walkazo, forever will be missed
M

Well, Poochy was planned to be in Paper Mario, but was scrapped.

Figment said:
Well, Poochy was planned to be in Paper Mario, but was scrapped.

Poochy fans must be having a hard time then.
Rest in Peace Walkazo, forever will be missed

Everything should be paperfied at some point. That is all.
eeeeee​

Fawful. I have also seen some edited paper Dark Bowser's on google images.

They also have Paper Fawful at MFGG

I'd love to see this. Where is MFGG? It's a website, right?

This is where you find it
Click to expand...

Yep, this needs to happen.

My kingdom shall triumph over all through the solid rule of our glorious princesses! My support is unending, my loyalty undying, and my patriotism undeniable!
P

I want to see a few tracks in Mario Kart in the Paper Mario style.

Toad's Factory is not a sponsor of the Super Mario Boards.​

The Toad Warrior said:
I want to see a few tracks in Mario Kart in the Paper Mario style.
Click to expand...