I remember playing Super Mario All Stars and a Buzzy Bettle was coming so I jumped. Guess what? I HIT A INVISIBLE ? BLOCK AND DIED!

Edit: Wow I didn't expect so many replies.

I remember playing Super Mario Galaxy 2 on Bowser Jr's Fiery Fortilla and at the start I hit some fire and Mario ran with a burnt bum and was squashed by a Thwomp epic death!
G

In Pokemon HeartGold, I captured Zapdos with a Net Ball.

I was playing one of my Yu-Gi-Oh! games and Kaiba summoned "Cyber-Stein" (a monster that allows the user to pay 5000 life points in exchange for summoning a fusion monster to the field) and summoned his Blue-Eyes Ultimate Dragon. I used Magic Cylinder and won the duel.

I was playing smash bros(64)
with my friends, we were 3, i was kirby and my friends were fox and luigi. I swallow fox and my other friend give me a strange look, i understood inmediately. I spit fox towards luigi and he... UP+B!! Fox was already with the stars!
NOPE​
G

I was battling a swimmer in FireRed and my Primeape's Thunder missed 5 TIMES IN A ROW. The swimmer had his Wartortle used Rain Dance making Thunder a guaranteed hit. My opponent just helped me defeat him. XD

I was playing Pokemon Stadium 2 and used Surf it said it missed, well the waves was all over Blaze!

I loved when I gave a yellow apple (not knowing the english name) to Peach in Super Paper Mario when she was sleeping and she woke up... with a mario 'stache!! (if you haven't tried it, I recommend. It's VERY funny!)

And when I was playing Mario Kart Wii with my bro, he was to going to be the first when someone threw him a blue shell at the last moment! I won...
Chivi-chivik M@ngaka!

I remember playing Melee when I got a legendary pokemon and getting another one shortly.

Scrub Jay said:
I remember playing Melee when I got a legendary pokemon and getting another one shortly.


Of course, the AI were too stupid to evade the pokemons' attacks.
Click to expand... 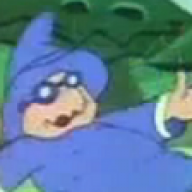 Who's an eggface now, egghead?

Me and my friend Robert were neck-and-neck in the last lap of a Mario Kart Wii race... he was winning until THE last milliseconds! He accused me of cheating... xD

Additionally beating my friend Maggie at every single race the first (and only) time I wi-fi'd with her.

When you think your going to die but you don't... That's way fun

ttp://www.youtube.com/watch?v=4gpi_uwOX0g
Be who you are and say what you feel because those who mind don't matter, and those who matter don't mind.
-- Dr. Seuss

Ok I got one, I remember this one time on online play on Mario Strikers Charged, the opponent passed the ball to his team mate, but the A.I. didn't catch it in time so the ball kept going to his side of the field and was going towards the goal, and as usual, the Kritter goalie is retarded to catch the easiest of kicks. And basically he followed it until it went into the goal, and that was a point for me. Man that guy must be so pissed

My bro was playing to Mario Kart Wii in the VS. mode. He was running in the Maple Treeway.
He got a Mega Mushroom and he activated it. He was crossing the top of the tree and he found there a star. He had a giant and invincible character!
I won't see that again.
Chivi-chivik M@ngaka!

I'm trying to continue my original art and fiction.
Art is my addiction.
I love games, my computer and stuff like this.
Z

Was free for all mode. I hit some pc character horizontally right, oddly enough, Mario, another pc character, did up smash, only to collide with Gannondorfs down air.


Another was Tekken 5, I was fighting against the cpu, and we had low health and we just stormed at each other, doing our dash attack, and conveniently enough, causing a double ko.

Banned User
Do a barrel roll! I don't know why, but I laughed whenever Peppy said that line, but it was only when I was younger. It might seem dumb, but the way he says it is kind of funny.

Also, Ho-Oh in SSBM. Basically obliterated all my opponents, but didn't fly off the screen. Instead, they shoot off towards the outside of the screen, only to be stopped and hit by tons of Uknown.
Real eyes. Real lies. Realize.

In mario Kart Wii, On Wi-fi A Group of 5 were so close together and they all got hit by the Blue Shell, I won as well. Me and 2 of My friends were Racign Wi-Fi, in Wario's Gold Mine. The Big Jump inside the Mine, Me and 1 of my friends got bumped by my heavy-weight Character friend. Straight away after he got hit by a Bullet Bill in the Air. We had all fallen off.

Mario Party all together is a Funny moment xD
hi

I was playing Mario Bros 3 when the SECOND I touched an upside down pipe a Piranha Plant stabbed me and I went through the pipe. When I came out Mario looked all glitched up. The game couldn't figure out whether I was dead or not so I was INVINCIBLE.

Mario Kart Wii. I was running in Bowser's Castle of N64. I was having a Bob-omb and I was on 1st place, Baby Daisy was trying to overtake me. Someone threw me a Blue shell. When it was over me, I threw my Bob-omb. Baby Daisy couldn't overtake me.
Chivi-chivik M@ngaka!

I'm trying to continue my original art and fiction.
Art is my addiction.
I love games, my computer and stuff like this.
P

In Mario Kart Double Dash I threw a Blue Shell when I was in first place and it hit ME.

PokemonMaster said:
In Mario Kart Double Dash I threw a Blue Shell when I was in first place and it hit ME.
Click to expand...

This happened to me too, but in Mario Kart Wii.
Chivi-chivik M@ngaka!

I'm trying to continue my original art and fiction.
Art is my addiction.
I love games, my computer and stuff like this.
P

Baby Luigi and Baby Mario always form a team in racing in multi-player mode in Mario Kart Wii so when somebody comes up we threw a object at them. One time Peach came up and Bullet Billed us to 12th place.
You must log in or register to reply here.
Share:
Facebook Twitter Reddit Pinterest Tumblr WhatsApp Email Link
Top