Wario's often mocked for being a pretty dumb guy, both in the games and otherwise. But throughout the series, subtle hints are being dropped that he may be smarter than he's letting on.

Even as an infant, Wario understood how magnets worked, and used a magnet to his greedy advantage. Babies capable of using semi-complex tools aren't a common thing.

Part 2 - Wario is a strategical genius.

What other villain in the series created a diversionary tactic that lasted an entire game? Tatanga, as it was revealed, was really just a distraction so that Wario could take over Mario's castle. In Super Mario Land 2, Tatanga's revealed as Wario's minion. (And yes, that alien is Tatanga, not just a lookalike, it's been confirmed). Organizing a coupe of one land for the sole purpose of taking over another is sheer brilliance at its best.

Though he expresses frustration in WarioWare's opening, Wario makes games with the best of them, and clearly has enough advanced programming knowledge to make his own videogames. But if that weren't enough...

In Wario: Master of Disguise, Wario invents the TELMET, a telporting helmet capable of transporting him into the television dimension. In a matter of seconds, no less. A dimensional transport machine is nothing to sneeze at.

Oh, and in various games(Wario's Woods, VB Wario Land, Wario Land 3), he's seen flying a plane. You have to have some knowledge to do that.

So what does this mean? Games have made references to Wario not being the brightest bulb, but is he perhaps feigning stupidity on purpose? Perhaps, even, so his enemies will let their guards down? Jests about his intellect(or lack thereof) aside, Wario may very well be one of the smartest people in the Marioverse.
img]http://img.photobucket.com/albums/v372/doceggman/userbars.png[/img]

See, i knew he was smart. but he still looks kinda stupid, hehehehehehehe

These are some of these... what do you call it... let's just say "conglomeration facts".
B

Yeah. UR TEH MSTR OF WRIO FNS, CHRS.

9-Volt probably makes the games. and in the SM64DS book, it says, "not to mention smarts"
ruet told everyone my age so i'm blocked from the Forums.
3


Max2 said:
9-Volt probably makes the games. and in the SM64DS book, it says, "not to mention smarts"
Click to expand...

No, no. In WarioWare, each character's games are developed by that person. So yes, even Wario develops the "Wario" games in Warioware.
img]http://img.photobucket.com/albums/v372/doceggman/userbars.png[/img]
S

Max2 said:
9-Volt probably makes the games. and in the SM64DS book, it says, "not to mention smarts"
Click to expand...

No, no. In WarioWare, each character's games are developed by that person. So yes, even Wario develops the "Wario" games in Warioware.
Click to expand...

Retired Wiki Staff
Re: you're 50% right

He loves it. Ever play WarioWorld? How many times he picks his nose...
Anyway, I think Wario is good at machinery, but lacks a bit of common sense and since his greed overtakes him often, it's reasonable to say that he is smart, yet stupid.[/b]
Rest in peace, Walkazo.

I've played/seen videos of every WarioWare game, and there are nose picking games all there. In twisted though, it's one of Kat and Ana's minigames.
3

I've never seen him actually portrayed as dumb, but his greed clouds his intelligence, making him do stupid stuff.
'm Sorry, but you're princess is in another castle...... you want directions? ummmmm.....

Retired Wiki Staff
Hmm... we have another Princess Peach paradox going down here. She's smart in some games, but dumb in others. But this here is even cooler, because Wario is obviously more of a genious. Peach has good ruling skillz, but...
Rawr! Raven/Crow Day! 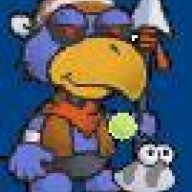 I always thought that Wario was too smart for his own good, so at times (nose-picking) he seems dumb. Although sometimes, he is so greedy that it is hard to imagine him somehow secretly being a genius.
3

His greediness and laziness overides his genius.

One aspect of Wario's genius is that he has discovered that living exorbetantly is not always bad. The genius of Wario may be his greed!

Retired Wiki Staff
I guess it comes to the whole thing about "A genious is only a term describing a person with a high IQ. A smart person knows how to work hard." Or however that goes.
Rawr! Raven/Crow Day!

Also, Wario can... um... uh... drop buckets on people's headz! That makes him smart! *snickers*
ruet told everyone my age so i'm blocked from the Forums.
3

Ah. His one and only, lovable failing.

Besides the garlic breath.

Yeah. But, he may well be smarter than E.Gadd even! I mean, like was previously said, building a dimension-controling device that works with your TV and Remote in a matter of seconds isn't something you can do on average.
ruet told everyone my age so i'm blocked from the Forums.
S

Dare to be stupid!