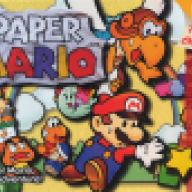 Banned User
This topic is about your opinion of what is the hardest UNSUNG Mario boss, or one that you believe is not widely known. My vote: The final boss of "Wario Blast: Featuring Bomberman". That thing was the ONLY hard part of the game (Sort of like how the final level of SML2:6GC was the ONLY hard part of that game). It looked like a floating bomberman without legs robot. It had three phases. You had to blast the thing 9 times while avoiding its endless rockets, lasers, various other projectiles, and there was only an instant or two where you could actually hit it!!! And guess whatelse: All the while you had to avoid YOUR OWN BOMBS cause they can kill you too! Sometimes avoiding the enemies projectile would have you inevitably getting killed by a blast from your own trap! And here's the best part: One hit, you are done! You have to start from the VERY beginning. Why I have never seen this on a hardest bosses list? Because it would seem it is obscure and not many people know about it, despite it being a very decent game no true Mario fan should miss. And that it why it has my vote for the hardest unsung boss in Mario history.

There is no time Mario has ever fought Bowser in ANY game ever that ever came close to it's difficulty.
~Marwikedor Ok since some members are vocabularily challenged, im just gonna say Unsung=not well known/not much cared or talked about
~Marwikedor

Wiki Patroller
You shouldn't use vocabulary like that if using "obscure" is just fine.

That aside, obscure for me is Wart's final battle. Instead of the usual three hits, it takes more than that to kill him. You also have to time it and wait until he opens his mouth, unlike just tossing random stuff at him.
(He/Him | She/Her) RIP B. "Walkazo" Dalziel. December 16, 1991 to March 27, 2016.