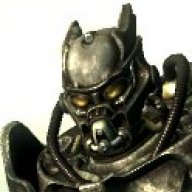 Now I'm not sure how far this topic will go, being a Nintendo themed forum but hey you never know.
Now for people who don't know what the game is about, I'll explain briefly:

Fallout 3 is a Tactical RPG, think Mass Effect/Star Wars Knights of the Old Republic, or more simply, its a shooter with RPG elements.
Now its no Call of Duty as running around firing wildly at things will get you taken out so you need to be fairly clever in how you approach enemies.

The world of Fallout is set in a Post Apocalyptic future where a war between America and China erupted and nukes were flying, and so the world is a radioactive wasteland.
People survived in underground cities called Vaults and emerged into a world full of mutated people and creatures.

That's the series overview for more info, see Wikipedia or a fan site but anyway I think its quite a fun game, and yes you can gun down everyone you see but killing everything gains you evil points which trigger events and you can gain good points which do the same.

Basically its one of those games where you can either blast through the story and never look at it again, or spend hours combing the Capitol Wasteland (F3's area) looking for interesting things.

Forum Moderator
Wiki Bureaucrat
Former 'Shroom Staff
Lemme me act out the inevitable reactions of the Fanboys dwelling in this place:

"It sucks! it's not in Nintendo consal!"

"NEVER HEARD OF IT".

I've never played this game, but I've heard a lot about the series.
Rest in peace, Walkazo.

Fanboys to tend to make stupid remarks about games they don't understand.
Its also out on PC/PS3 and I'd highly recommend it to anyone who loves free roaming exploration games.
I quite enjoy roaming around clad in Tesla Armour (Black armour that glows blue) and scaring random people.

I know a guy who's brother was the art designer for the game.

Also for anyone who owns it, the 2nd DLC is out this month.
Its called The Pitt, details soon!