Despite the fact that this is a Ninitendo forum, I have to ask. Is anyone else here a fan?
'm Sorry, but you're princess is in another castle...... you want directions? ummmmm.....

Retired Wiki Staff
Blasphemy! :evil: .... Just kidding. And no, I haven't played the games, I've seen them in action though.
U

:D . Actually, one of them is on the GBA, so forget about the Nintendo - only line.
'm Sorry, but you're princess is in another castle...... you want directions? ummmmm.....

rented the first Kingdom Hearts back in '03, thought it was sort of gay
U

Not quite sure what you mean.


And my low videogame standards enable me to enjoy any game I play so I liked pretty much all of them.
'm Sorry, but you're princess is in another castle...... you want directions? ummmmm.....

Retired Wiki Staff
Kingdom Hearts is a love it or hate it game, as I believe 3D said in this month's issue of the 'Shroom.

Personally, I enjoy it. The quest is a decent length, with ample difficulty. Just no sidequests. That kind of annoyed me.

There wre side-bosses though. Sephiroth and that Arabian thing.

But yes, it is love-it or hate-it,i've heard a lot of people say it is too repetitive.
'm Sorry, but you're princess is in another castle...... you want directions? ummmmm.....

Retired Wiki Staff
I play it with my friend who owns it... it's quite good.
Rawr! Raven/Crow Day!

Retired Wiki Staff
No, seriously... get past the Mulan part in number two and it's pretty sweet. Plus, Kirie or whatever her name is is pretty cute in number 2... JAPANESE SCHOOL GIRLS! Yay!
Rawr! Raven/Crow Day!

I've never played KH1 or KH2,but i have played KH:COM(for the GBA)
it was good and 3 looks awesome
in democracy we elect people to dictate us
Life sucks doesn't it

Retired Wiki Staff
Hmm... yes. She wants to freeze you with her eyes of death. But she's hot just the same.
Rawr! Raven/Crow Day!

I look forward to seeing how well it does on the DS, when it comes out, though Sora isn't the main character in the DS mid-CoM game, it'll be Roxas from the 2nd game. Still looks like a typical Kingdom Hearts game.

I also think that the Mushroom Kingdom Hearts 'April Fools Joke' should be made into a real Wii-exclusive game. That would be pretty cool. 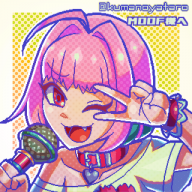 This is an actual quote. This was an actual post. Somebody actually sat down and clacked in that combination of words onto their keyboard.
L

Kingdom Hearts is from Square-Enix, an old ally-company of Nintendo, & Square has been showing an interest in returning to make more Nintendo games again, so I wouldn't be surprised if we see more Kingdom Hearts in the future. 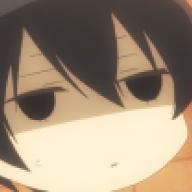 Retired Wiki Staff
There have been some games for Nintendo consoles... though only the portables. I've played Chain of Memories. It's alright. I feel like I should get the other ones available for the DS. And then there's this new one for the 3DS!

So yeah, I like it, if only because of the Disney characters they use. I hope Oswald the Lucky Rabbit makes an appearance sometime. In face, I have some ideas on how he can be used, as well as some other characters.

I think Disney has officially welcomed Oswald back and now they're going to do stuff with him. If he were included in a Kingdom Hearts game, I'd imagine him being the rightful ruler of Disney Castle until something unexpected happened and his disappeared under mysterious circumstances. Now he's back and wants to take the throne back from Mickey, who doesn't know who he is. I had this idea that while he was gone he somehow became a Heartless, he controls the Heartless, and the Phantom Blot (who's nothing like that lame version from Epic Mickey) is secretly controlling him without his knowledge, but I don't know that much about the Heartless to go into that. Eventually, he realizes he was wrong and tries to make amends with Mickey, then goes off searching for his love, Ortensia who disappeared around the same time as him.

The Plantom Blot I was also thinking about. Is there any other Disney villain more suited to being associated with the Heartless than the Phantom Blot? You know, other than Maleficent and Chernaborg? I wasn't sure about what his backstory would be, I'd just know he's an evil mastermind, almost like the characters associated with Xehanort, except he can completely control the Heartless. He IS a Heartless, basically. I was thinking about putting him higher than Maleficent, but I'm not sure if that'll work.