What is your favorite Wario Land?

Banned User
Favorite Wario Land.
ASKING FOR ONE MORE CHANCE TO WRITE FOR THE 'SHROOM IS NOT AN UNREASONABLE REQUEST! I HAVE DONE MORE GOOD THAN HARM FOR THE 'SHROOM AND THERE IS NO FUCKING DENYING IT!!! IN THE WORDS OF DR KING, THE ARC OF HISTORY ALWAYS BENDS TOWARDS JUSTICE!!

Retired Wiki Staff
Of the ones I've played, I like Wario Land 4.
[...]This is the best weekend I've had since Salem.

What about Wario World?

Retired Forum Mod
I really like the original Wario Land title. I wish it'd release on eShop so I can play it again.

YoshiGo99 said:
What about Wario World?
Click to expand...

YoshiGo99 said:
What about Wario World?
Click to expand...

I guess it counts if thats your favorite then say so.
ASKING FOR ONE MORE CHANCE TO WRITE FOR THE 'SHROOM IS NOT AN UNREASONABLE REQUEST! I HAVE DONE MORE GOOD THAN HARM FOR THE 'SHROOM AND THERE IS NO FUCKING DENYING IT!!! IN THE WORDS OF DR KING, THE ARC OF HISTORY ALWAYS BENDS TOWARDS JUSTICE!!

DKCR 3DS Sequel! Its a sequel! Yay!
B

Banned User
Wario Land III and IV are probably my favorite, but please let's not forget the Wario Land for the Virtual Boy! If ONLY they would port it to another platform! I can't afford 169 bucks for a VB! Here is the Reception from Wikipedia:

[edit] ReceptionNintendo Power listed Virtual Boy Wario Land as the best Virtual Boy video game ever. The editorial staff praised it for having the same great gameplay that the Wario Land series is known for as well as its entertaining 3D effects.[2] ScrewAttack and Gametrailers consider Virtual Boy Wario Land as the only good game on the Virtual Boy.[3] The News Tribune named it the best game released for the system.[4] The Daily Gazette's Seth Nevins felt that the 3D effects were not enjoyable, calling the graphics "pitiful."[5] ABC Good Game called it the best of the platform's, commenting that while it lacked good use of the system's features, it had lasting fun.[6] Rocky Mountain News's Joel Easley praised it for its 3D visuals and the quality of the gameplay, adding that the visuals demonstrate the Virtual Boy's possibilities.[7] The Los Angeles Times' Aaron Curtiss called it a "hoot to play", praising its graphics as "dazzling".[8] The Associated Press commented that Wario did something that Mario couldn't do - "create a reason to buy the Virtual Boy." They praised its characters as hilarious and its setting for retaining the charm of the Mario series.[9] Wired's Chris Kohler noted that the Virtual Boy didn't have a killer app to demonstrate the 3D. He said that while Wario Land was the best Virtual Boy game, calling it addictive and lengthy, it made little use of the 3D.[10] Home News Tribune Victor Janas called it "simple and lots of fun".[11]

CraveOnline's Will Greenwald criticized the video game selection of the Virtual Boy as poor, noting Wario Land as an example of the poor selection.[11] Official Nintendo Magazine's Chris Scullion stated that he loved it. He also called it a great platformer.[12][13] Nintendo Life's Dave Frear praised its visual design and audio quality, calling it a "top-notch platformer" and a game that players will want to replay.[14] Retronauts' Jeremy Parish praised it as the only genuinely great game for the platform, using it to show the quality of the Wario Land series.[15] GamesRadar's Mikel Reparaz named it the best title for the Virtual Boy.[16] IGN's Craig Harris cited this game for bringing the Wario Land series to fruition, picking it as a game that should be remade for the Nintendo 3DS.[17] He and fellow IGN writer Levi Buchanan commented that it received some buzz back in the day.[18] Buchanan noted that it was the closest thing to a Mario title on the Virtual Boy, though a "fine 2D adventure."[19] IGN AU's Patrick Kolan called it the closest thing to a killer app on the Virtual Boy, as well as the pinnacle of gameplay on it.[20] 1UP.com called it a great game.[21] 1UP.com's Neal Ronaghan called it the gem of the console; he adds that while not the best of the series and didn't take much advantage of the 3D effects, it was still excellent.[22] GamePro praised it for its sound effects and character sprite quality, calling it the best of the platform.[23]
ASKING FOR ONE MORE CHANCE TO WRITE FOR THE 'SHROOM IS NOT AN UNREASONABLE REQUEST! I HAVE DONE MORE GOOD THAN HARM FOR THE 'SHROOM AND THERE IS NO FUCKING DENYING IT!!! IN THE WORDS OF DR KING, THE ARC OF HISTORY ALWAYS BENDS TOWARDS JUSTICE!!

You know you don't need citations on a message board, right? Anyway, my favourite Wario Land game is probably Wario Land 4, because Wario has many abilities in that game. 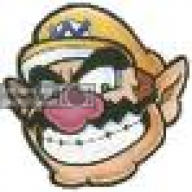 My favorite Wario Land games are the first one, the third one, and Wario Land Shake It.