Epic Mickey 2: The Power of Two 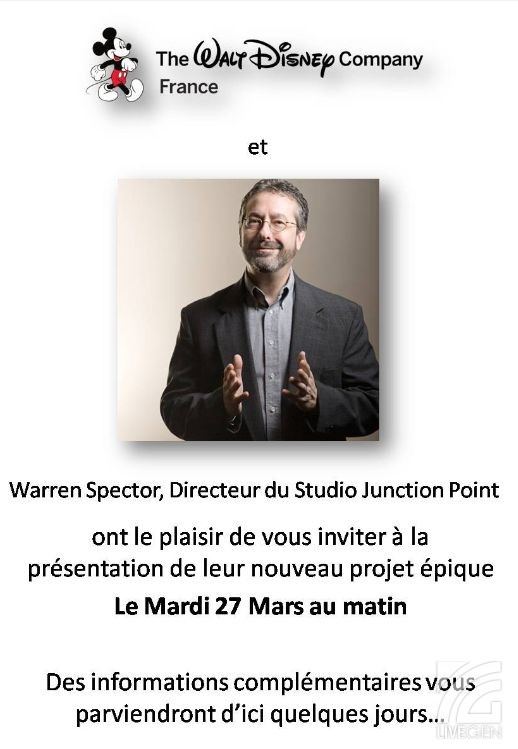 A few months ago, Disney held a poll to decide what kind of coverart fans wanted for a potential sequel. Even still, they didn't announce the game, or say it was in development...

But now it seems like we're going to get our answers from the man behind the original game, Warren Spector. March 27, huh? Can't wait!

I hope it is good. I never played the first game but I did find the parts I saw of it on Youtube quite funny.
N

I found the first one to be bad, so not getting this. Only my friend agrees with me....


New Super Mario said:
I found the first one to be bad, so not getting this. Only my friend agrees with me....
Click to expand...

Hey, maybe they fixed the problems with the original game?

Epic Mickey was a fine game from what I've seen though it wouldn't hurt to fix up the gameplay in a way.

It's good news to hear news about a sequel. It's also nice to see Oswald getting more recognition!

Possible first trailer and gameplay footage for this game to arrive within the next week?

Apparently he says it's time to move to other platforms, there might be co-op, he addresses the major concerns of the camera, and also said the lack of real voice work in the first game "was a mistake", and there would, theoretically, be full-fledged voice acting in the game.

That last part sounds pretty awesome, to me anyway.

Well, Mickey has a voice... And Frank Welker, voice acting GOD, is the voice of Oswald, and those are pretty much the main characters of the game. Given that this game is based around pre-existing cartoon characters, and this is Disney we're talking about, they'll probably get some good talent for this game's voice acting.

If that's true, I hope it turns out better than the 3DS version of Sonic Generations...


Smashgoom202 said:
If that's true, I hope it turns out better than the 3DS version of Sonic Generations...
Click to expand...

Smashgoom202 said:
If that's true, I hope it turns out better than the 3DS version of Sonic Generations...
Click to expand...

True, it wasn't that bad, but compared to the Xbox 360 version, it felt lackluster...

Apparently, these aren't teases, but outright confirmations! What is confirmed is as follows:

- Voice actors confirmed
- Jim Dooley and Mike Himelstein (Dorothy of Oz) working on the music
- Frank Welker voicing Oswald (character never spoke in the original)
- Oswald will be a playable character
- Co-op confirmed
- Mickey still has a brush powered by magical paint and thinner at his disposal
- Oswald will wield a remote control that can command electricity
- The two will need to work together to overcome obstacles
- Players choices will still affect what happens in the game
- Songs and music will change based on whether players are well-mannered or mischievous
- Wii/PS3/360 versions confirmed
- Camera will be fixed
- Takes place in Wasteland once again
- Mickey will revisit some areas from the first game, but earthquakes/other disasters have changed their appearance
- Mickey will likely visit unseen Wasteland realms as well


Also it appears there will be some musical numbers in this game. And there is drop-in/drop-out co-op with Mickey and Oswald. Kind of like a tag-team thing. While playing in single-player, Oswald is still there to help.
Click to expand...

Jim Dooley returning is good, his music in the first game was great! Not sure who Mike Himelstein is, though.

Technically, Oswald DID have a voice in the first game. It's just they were little more then grunts and sighs. He was voiced by Frank Welker in that game as well.

The idea that Oswald having a remote control that wields electricity harkens back to when the Mad Doctor used to work for him, so it makes sense, AND it's cool!

Hrm, so even though the "Shadow Blot" is gone, there's still trouble in Wasteland? Also, is that what it was ALWAYS called? Even BEFORE the Shadow Blot ruined everything? That kind of sucks...

I can't wait to see new realms and new characters as well.

The idea of co-op kind of turns me off, since I usually play alone... It makes me wonder how the single-player mode will work, and if the extra character controlled by A.I. will actually help rather then be a pain in the butt.

Still, love getting this new information!

Where did Oswald get his fancy remote?
The villain could always be some other disney villain.
I wonder how the disasters happened. . .

Like I said, I'd like to believe Oswald kept some old gadgets the Mad Doctor created, back when he still served Oswald.

As for the villain, I hope it's the Phantom Blot. The REAL Phantom Blot, who's a foreboding and intimidating mastermind (like a Mickey Mouse universe of Doctor Doom), instead of just a generic mindless monstrosity like the "Shadow Blot" was.

I liked Epic Mickey, so this should be good. but epic mickey was a bit... bland looking. maybe a little bit more colour this time.
hi

Well, that's because it's the opposite of SMS, you're supposed to color it in the buildings.

Its hard to explain, errr, the overall feel of each area, felt bland, the colours were just bland.

That didnt explain it all. um, the game felt like it was drained of all its colour and somebody tried and failed at repainting it all.

Well, that doesnt explain it either. Lets just say i think it looks pretty shit and leave it at that.
hi

And it's not like you can color everything, some things are just permanently inert and stuck as deformed and something out of a Tim Burton movie.

Edit: Screenshot from the game! Also, it's going to be a musical:

I know, I've played through it a couple of times now. It just feels shitty. It doesn't make me want to play it.

I try my best to 100% it but I can't bring myself to play it for so long, since I just get bored of all the looks.
hi

Retired Wiki Staff
Sad thing is, you have to play through the game at least 2 or3 times to get 100% completion. I couldn't do it, mostly because I don't like doing bad things, even in a video game.

Smashgoom202 said:
And it's not like you can color everything, some things are just permanently inert and stuck as deformed and something out of a Tim Burton movie.

Edit: Screenshot from the game!

Also, it's going to be a musical:

so, you have to work together? that's annoying bacause I like playing solo. Well, if that's the computer, it works better than I thought it would.

Retired Wiki Staff
Actually, from what I heard, in single-player, you can switch between playing as Mickey and playing as Oswald. I assume he means that only one of the two will be onscreen in single-player, because otherwise, it'd just get really annoying have to drag some dead weight around.