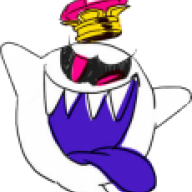 Hey, all. I'm currently working on a fangame using a modified version of Game Maker's Hello Engine, complete with a graphical overhaul, starring an adventurous boo as the main character. I intend to make it a pretty ambitious project, or at least, to the best of my abilities. Each level will be completely distinctive from each other, and level design itself will be my top priority. The gameplay functions overall like a Mario game, but I would say the atmosphere I'm trying to capture resembles closer to that of a Wario Land title (or Wario Land 4, specifically, which is what I'm most inspired by).

So far, I only have two levels finished (the tutorial and first level), which I will have YouTube videos up of soon. Feedback and constructive criticism is always appreciated. I want to make this simply a fun romp for fans of platformers, and I'm more than accepting of advice from others.

Thanks for your time~

Here are some snaps in the meantime for anyone interested:

Throwing carrots in the garden:

To the Goal Pole:

Past the Push Block:

In the vegetable patch:

Oh, and there will be full disclosure of credit to all sprite work and tilesets I've used.

For these images in particular, credit goes to:

Been a while since I updated. Not sure if anyone's interested, but either way, I've redeveloped the levels, and have the first few videos up.