This is of course from the current proposal at the wiki by Son of Suns. The one that looks like an epic American Revolutionary War incarnation. But the idea of it was very interesting to me, and I wondered what forum-but-non-wiki users think about this in a more casual environment (to define "forum"). I'd like the thread to stay even after the proposal expires, because this concept may come back later some day.

I'm personally for it, what do you guys think?
Can you think of anything that talks, other than a person?

What the golfers say.
S

Chat Administrator
Retired Wiki Staff
As I stated on the proposals page, I'm all for internationality. I just can't help but feel there will be inconsistencies.
Rest in peace, Bronwyn.

Stooben Rooben said:
As I stated on the proposals page, I'm all for internationality. I just can't help but feel there will be inconsistencies.
Click to expand...

Stooben Rooben said:
As I stated on the proposals page, I'm all for internationality. I just can't help but feel there will be inconsistencies.
Click to expand...

But, as I said, by doing that, it's inconsistent (and somewhat discriminative) to keep things all English, even if titles are from foreign nations. (The UK, Australia, etc.) By doing that, we should move all games to their respective first title, be it Japanese or whatnot.
Rest in peace, Bronwyn. 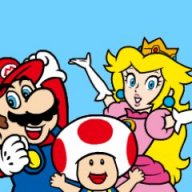 Retired Wiki Staff
It's sad. Really sad. I have to admit I'm one of the folks that "opposed" the proposal (no offense, Son of Suns). Now that the proposal has "passed" (thanks to someone who voted for it at the last moment), it's going to take me a long time to get used to the title changes, even though the Wiki itself is HQ'd in the U.S.

Why aren't we using the Japanese titles?
Credit to Edofenrir for the middle image below.

Free Loader said:
I personally dislike this change. I believe we had such a proposal before and it was shot down when someone pointed out porplemontage saying that 99% of our traffic comes from the US(or something along those lines). And what the hell is wrong with the people who think there's an "American Bias" on the MarioWiki because we use the "American" game titles(or used)? Do you think some Australian guy is gonna be looking for Mario Strikers Charged Football information, and be offended when he gets redirected to Mario Strikers Charged?

No one has a GOOD argument AGAINST this because it doesn't really CHANGE anything. Your just moving pages around for no reason.
Click to expand...

This is basically everything I've wanted to say.