So apparently Sega, Capcom, and Namco-Bandai are working on some kind of crossover RPG for the 3DS.

I don't see this being localized, but you never know.

That could get interesting. Especially with Zero in it.
Never! He will not:
Age cannot wither her, nor custom stale
Her infinite variety. Other women cloy
The appetites they feed, but she makes hungry
Where most she satisfies; for vilest things
Become themselves in her, that the holy priests
Bless her when she is riggish.​

Must have.
[...]This is the best weekend I've had since Salem.

I'm a bit bummed at the lack of Soul Calibur characters, but w/e.

I find it weird that Japan uses "X" as a psuedonym for "cross", but whatever.

Yeah, a crossover that ISN'T a fighting game. In fact, according to this:

It's a "simulation RPG". I don't know about the simulation part, but I freaking love RPGS!

Banned User
Don't get your hopes up.

A similar project went down years ago for the ps3 and it was one of the most horrible games to ever exist according to many rpg fans.
Rest in peace, walkazo.

What game was that? 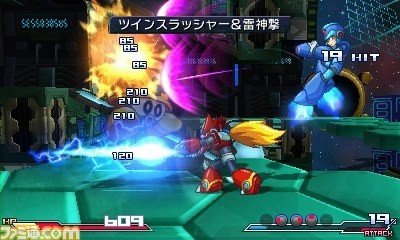 Lots more pics in the source.

Alisa and Soma from Godeater, Frank West from Deadrising, Lei-Lei from Darkstalkers, and Zephyr and Leanne from Resonance of Fate.