Because I need to know. I happen to find Fi (the character, not BMB) to be incredibly annoying, much more than Navi. She stops you every five seconds, has a weird voice, and puts percents in EVERYTHING. I can't go five feet without her informing me of something I already know how to do because it's freaking obvious. Does anyone agree with me on this?

I like Navi better. Fi kinda creeps me out

Fi. Although I do like Navi although loads don't like her.
Rest in Peace Walkazo, forever will be missed

Retired Wiki Staff
Fi knows what she is doing. Fi has an echoing voice that sounds way better than that nasally annoyance. Fi knows what is going on. Fi is more calculating, more precise, more user-friendly, and less bothersome. She's a teensy bit annoying for like the first temple, but from that point, she makes observations that actually reveal something not obvious.

Fi pwns, Navi does not. No contest.
Never! He will not:
Age cannot wither her, nor custom stale
Her infinite variety. Other women cloy
The appetites they feed, but she makes hungry
Where most she satisfies; for vilest things
Become themselves in her, that the holy priests
Bless her when she is riggish.​

I never played Skyward Sword, but I have heard Fi's voice before and it is annoying in my opinion, but I bet she has a great personality and isn't a know it all bitch..
Navi is just a useless filler.

You should add a neither option. Fi would be good if she wouldn't talk so much. And her voice does creep me out.


Lord Ghirahim said:
Fi knows what she is doing. Fi has an echoing voice that sounds way better than that nasally annoyance. Fi knows what is going on. Fi is more calculating, more precise, more user-friendly, and less bothersome. She's a teensy bit annoying for like the first temple, but from that point, she makes observations that actually reveal something not obvious.

Fi pwns, Navi does not. No contest.
Click to expand...

Although you do have a great point there.

Retired Wiki Staff
I like Fi so far. Not only is she more appealing to the eye compared to Navi, I find that her voice has a somewhat musical quality that I like (though the "master" thing's a bit weird).
[...]This is the best weekend I've had since Salem.

Chat Administrator
Core 'Shroom Staff
Awards Committee
Retired Wiki Staff
I like games that encourage exploration of the worlds they are set in. Whenever I play a game for the first time, I usually take breaks throughout the mandatory plot just to wander around, take in the scenery, the atmosphere, and admire the little details the game designers sprinkled all over the setting.

I know of a part in Skyward Sword, where you are in the Faron Woods and have to chase some weird bulbasaur/penguin hybrid. During that scene, if you try to stray from the path, the game will not let you do that. Fi will interrupt your play, talk to you about how your dousing readings point into a different direction, and she will actively block your path.

For the explanation aspect of gameplay, this is somewhat of a fatal blow. Older Zelda titles, especially Ocarina of Time, Majora's Mask, have always encouraged exploration. I can think of no situation in which either Navi or Tatl have ever actively prohibited you from going somewhere. It is the job of an exposition fairy to subtly guide you and teach you about the mechanics of a game. If an exposition fairy exceeds that role, and insists on confining you to what is the equivalent of a monotone railway, then, at least in my opinion, that exposition fairy has failed.

Navi may have been annoying, but you always had the option of just ignoring her and go explore anyway. You cannot ignore Fi however. You will either have to play the game she means it to be played, or turn off the console. There is no alternative.

And that is why, for me, Navi is a better partner than Fi.

Retired Wiki Staff
To Fi's credit, there isn't all that much to explore during that portion of the game.
[...]This is the best weekend I've had since Salem. 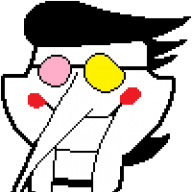 Chat Operator
Well I never found Navi to be much of an annoyance but maybe it's because in Ocarina of Time there was a certain other source of major irritation I despise so much.

I never played Skyward Sword but if Fi forbids the player from exploring, then that's a bad thing.

So yeah, I have to go with Navi here.
Kio-Wirima Sign-ups|Userpedia Page​

IMO Navi's not that annoying. I'm playing Ocarina for the first time and she's not that irritating. Fi on the other hand I can't say because I've never played LOZ SS.

Actually, I take it back. Navi catches your attention by saying "Listen" and tells you over and over again what you already know while Fi actually has to be summoned to talk to her, and she gives out 3 times more information. Including how much hours you have been zoning out on the game. Also, she tells you how to destroy monsters, how much monsters you have destroyed of the like, and how strong (or my case with spiders) very weak you are with them.