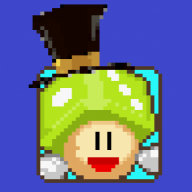 I can see the similarities, but where is the hammer.
Yoshi's Lorry.
Art Thread | Ask Thread

His mine cannon arm thingies look like the hammers. 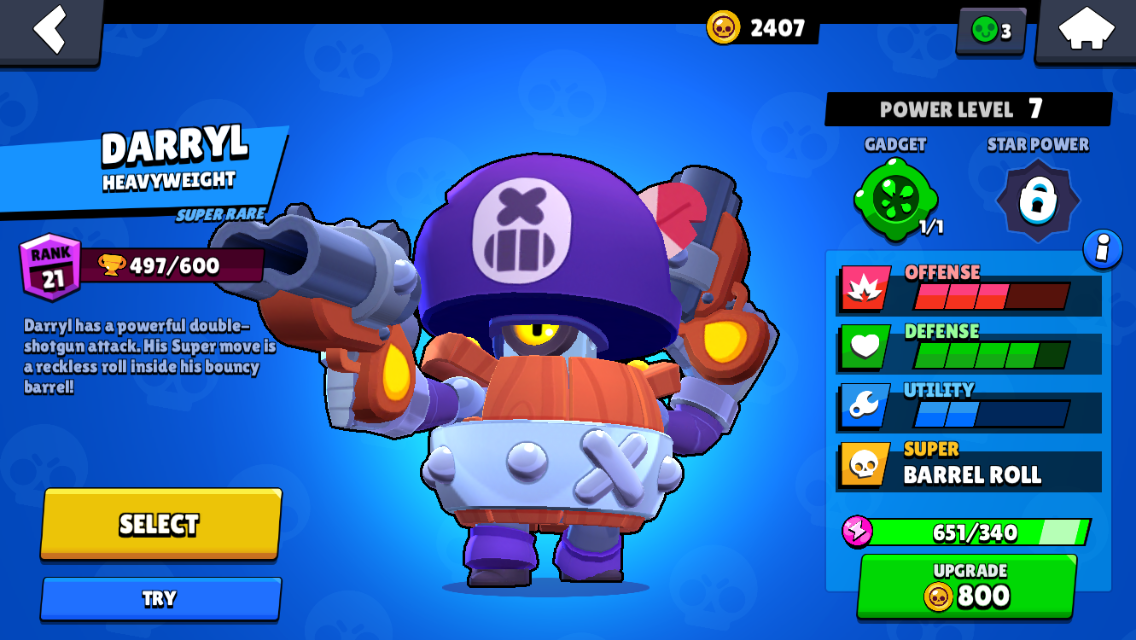 Darryl is my personal favorite Super Rare. He's a very up-in-your-face Brawler with a high damage output from his double barrel shotguns. He is one of two Brawlers who constantly charges his Super (albeit very slowly) and his Super allows him to retract his limbs into his barrel-body and roll a short distance across the stage, bouncing off walls and knocking opponents back. It's not actually good for dealing damage and is instead usually utilized for closing the gap on far off opponents. His Star Powers amplify his Super, either doubling his reload speed for five seconds after using it (great for going against high health targets) or shields him against 90% of all damage for the duration of the roll (great for chasing high damage opponents).

He is a part of the Pirate Trio with Penny and Tick and has several similarities to Nani, Rico, Stu, and Barley.

According to old design photos, he was originally going to be an old west type robot, evidenced by a mariachi style hat.

Next we meet Penny, the splash damage queen!
This post is sponsored by M-corporated. 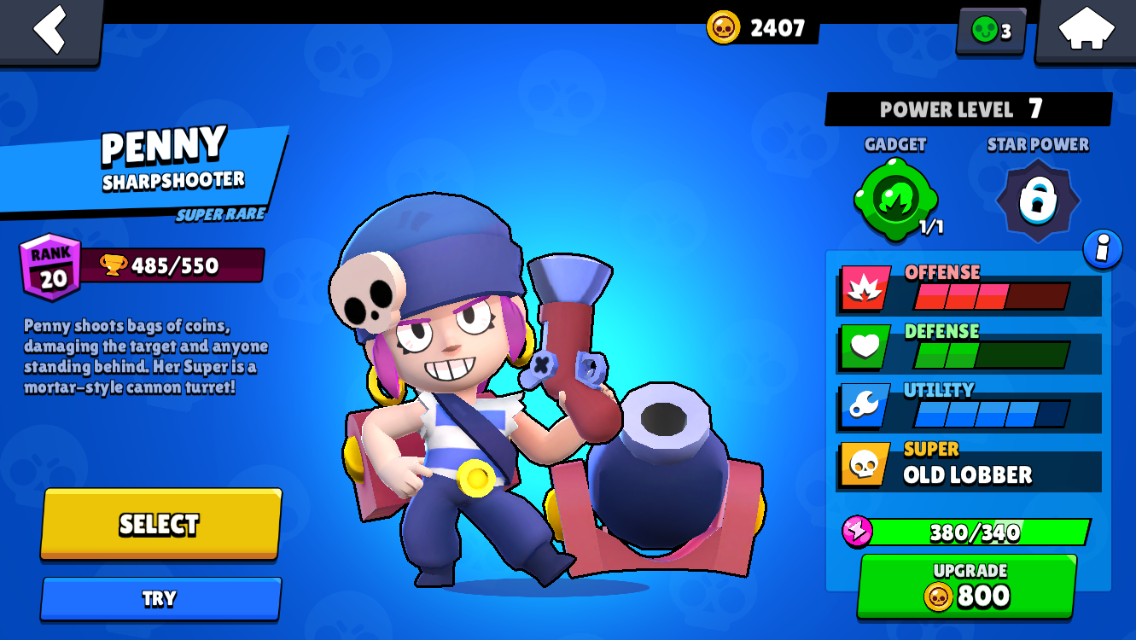 Penny is a Super Rare Sharpshooter, earning her an interesting mechanic that's not too hard to use: She shoots bags of coins that break open on contact and spread outwards immediately after, dealing the same damage as the initial bag. (It's like, three coin chunks, meaning if you stand directly behind something that just got hit, you'll take 3X the damage.) Her Super lays down a cannon turret that fires cannonballs at a slow rate with high damage, making it ideal for Siege and Heist. Her extras all have to do with the cannon and are all really good. (Either cause each cannonball to create an pool of fire around its blast radius or cause her cannon to shoot off four or five extra balls upon being destroyed. The Gadgets will instantly launch a barrage of balls to her current location or you can cause the cannon to instantly explode.)

Penny is in the Pirate Trio with Darryl and Tick and has no relation to other Brawlers.

Not much is known of what Penny used to be before Brawl Stars.

Next we got to Carl, the Miner Robot!
This post is sponsored by M-corporated. 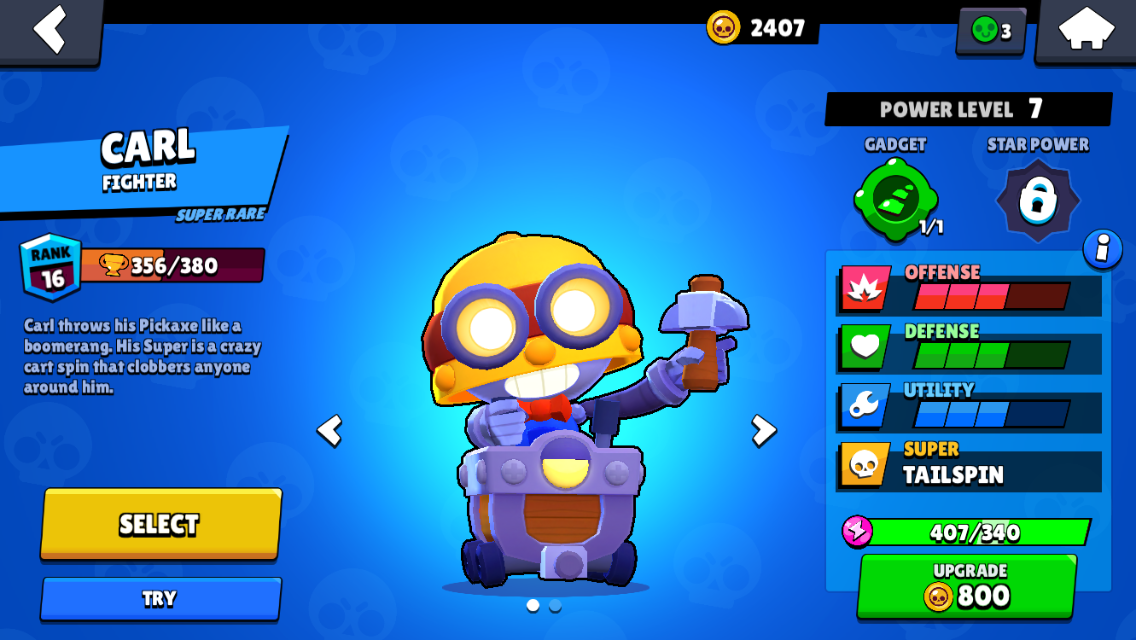 Carl is a robot. I know, I'm surprised too. He's one of two current brawlers with only one ammo slot. He throws his pickaxe at opponents and it boomerangs back to him, most likely hitting twice. Once it reaches him, he can throw it again. It'll bounce off walls on its way out and go through walls on its way back. This means that spamming it at a wall immediately next to one will give him the fastest reload/shot speed in the game, but it's not practical. For his Super, he goes into a tail spin, damaging people multiple times. He's the only character to be totally average on stats as well.

Carl is a part of the Miner trio with Jacky and Dynamike (May be the easiest trio to complete, only need 2000 trophies for Dyna and the others are Super Rare) and has no confirmed relationship with other Brawlers.

Carl can be seen with Jacky in the animated portion of the trailer in a mine.

Next we go to Jacky the most (drilling noise)-headed miner around, and the last Super Rare.
This post is sponsored by M-corporated. 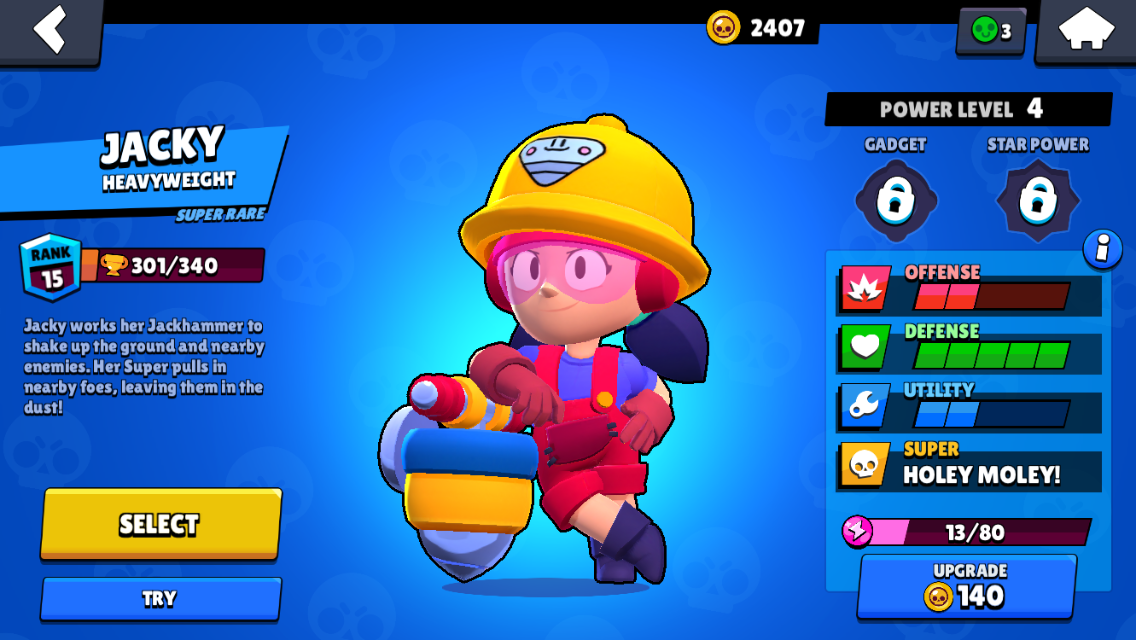 Jacky is the latest Super Rare to be added to the game (which isn't saying much. She was added like, over a year ago) and probably has one of the more unique functions. She's one of five characters who can use a basic attack to directly hit someone when there's a wall between them. (The other four are the three Throwers and Mr. P, who is essentially a combination of Sharpshooter and Thrower.) For her main attack, she uses her jackhammer to pound the ground, which causes a tremor in a circle around her. This makes her really tricky, because you have to be careful not only when approaching a bush, but when approaching a wall with a bush on the opposite side. Her Super isn't very useful in many situations. It draws any opponents in a wide radius towards her and gives her a temporary shield, but it can be so hard to time and the shield lasts so little that it's not incredibly useful.

Jacky has no confirmed relationship with other Brawlers, other than being a part of the Miner Trio with Carl and Dynamike.

In the Starr Park Trailer, as the spokesman is riding a minecart through a tunnel, you can see construction workers all around. One is a woman with black hair like Jacky's and she's using an oversized jackhammer. This was probably Jacky, and she was probably on the construction/demolition crew before Brawl Stars.

Next we head for the first Epic character, Piper, the prim and proper snappy sniper!
This post is sponsored by M-corporated.

Yes I changed my theme back to my OG one, but I'll still update this with stuff about Brawl Stars.
This post is sponsored by M-corporated.